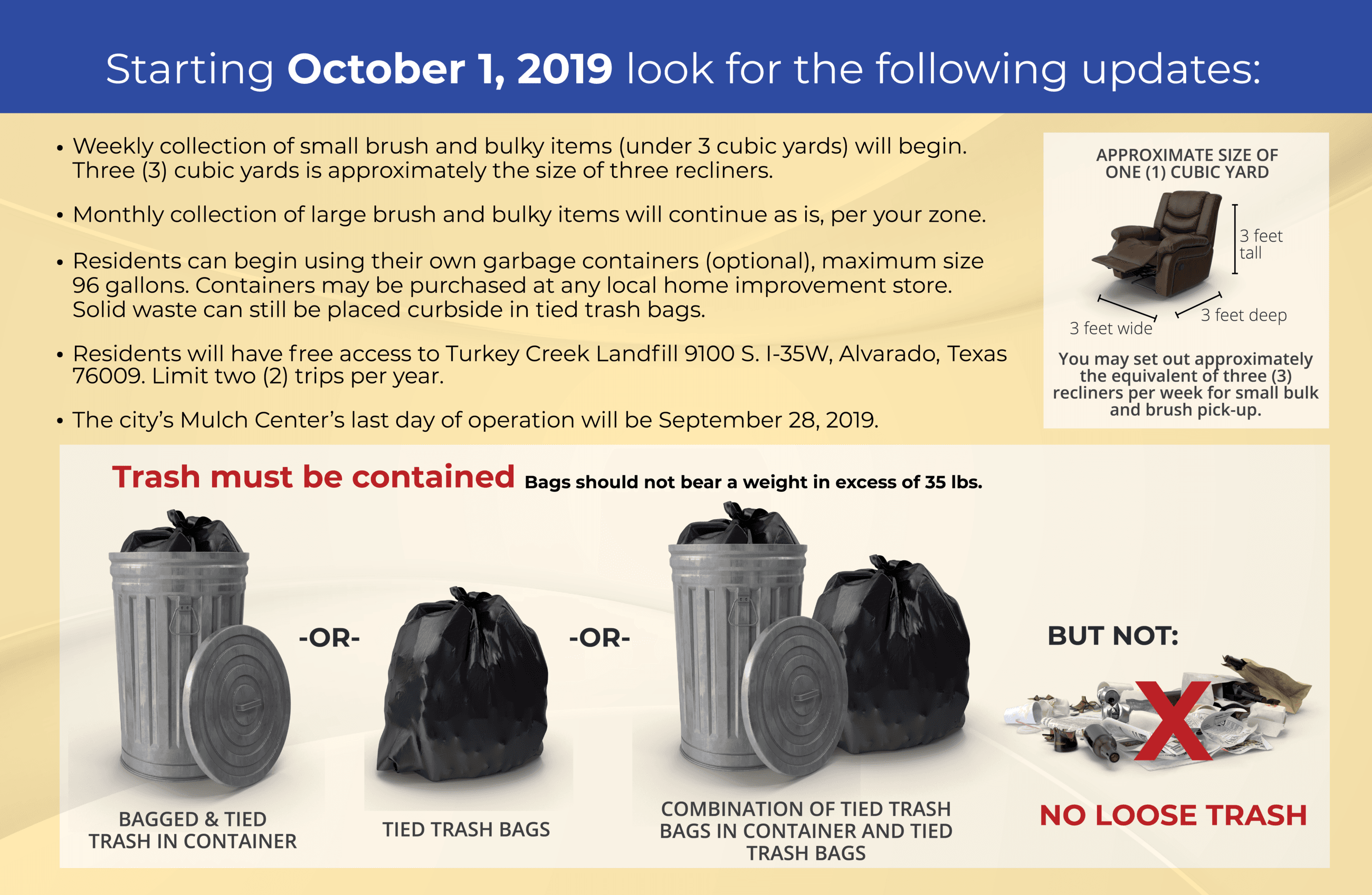 August 20, 2019 FINAL UPDATES: In May and June 2018 the city conducted public outreach asking residents what they would like to see in their trash and recycling services. An online and print survey was available and eight public meetings were held throughout the community, including an online town hall. Over 1,700 surveys were returned, and city staff utilized this input to make the following changes to Burleson’s trash and recycling program.

Starting October 1, 2019, weekly collection of small brush and bulky items will start, monthly collection of large brush and bulky items will continue as is. The city’s Mulch Center’s last day of operation will be September 28, 2019. Also, starting October 1 residents can begin using their own garbage containers, if they would like. Solid waste can still be set on the curb in trash bags.

With the opportunity to begin a new garbage and recycling contract in June 2019, city leaders are interested in hearing what our citizens think about everything from 95-gallon carts to curbside special trash collection to recycling collection.

August 7, 2018 UPDATE: The information from the public survey and multiple public input meetings was processed and presented to City Council during their regularly scheduled meeting Monday, Aug. 6. The four biggest takeaways from the data was that the Mulch and Recycling Center was underutilized, 85% of brush and bulk setouts could be collected weekly, the current recycling bin was considered too small and the current solid waste service was more popular than automated carts.

City staff took forward the following recommendations from the Infrastructure and Development committee:

July 31 UPDATE: Staff will present the survey findings and a recommendation from the Infrastructure and Development Council Committee to City Council during their regularly scheduled council meeting on Monday, August 6. View survey results.

THE PROCESS: City staffers expect to begin the bidding process for Burleson's next garbage and recycling contract sometime between December 2018 and January 2019, so utility customers have until Sunday, June 30 to add their voice to the feedback via an online survey. The survey is also available in print, please contact (817) 426-9835 to request one.

Customers will also be able to speak to staff about the solid waste contract at several Town Hall meetings. Schedule of meetings are below.