Do you want to learn more about the history of the Russell-Boren House at the City’s Russell Farm? Thanks to a team of volunteers, you can take a free guided tour of the farmhouse on Saturdays, from 10 a.m. to 2 p.m. 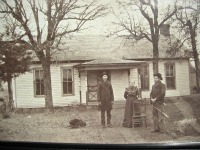 The farm is located at 405 West CR 714. Built in 1877 by the recently widowed Martha Glenn Russell, an independent pioneer woman, the house sheltered not only Martha and her 5 children but also descendants of the Russell family for 135 years.

Martha & Her Husband
Martha and her husband, Dr. Robert Russell, moved to the Marystown community, Johnson County, in 1874. He built a country store and practiced medicine. When the doctor died 2 years later, Martha sold the store and bought 540 acres of land at what would become Russell Farm. She and her 5 children moved in to the 3-room house on Christmas Eve 1877. Even today, the central core of the farmhouse is made up of 2 of the 3 original rooms built in 1877.

“Docents will tell stories of the families who lived here and demonstrate how the house grew from the original 3-room home to the much larger home it is today,” Gary Burkins, Russell Farm supervisor, said. “Guests will not only see a house filled with antiques that were considered modern at one time, but a house which was also home to the artist Charlie Boren and his wife Louise until 2011 when they donated the farm to the City of Burleson. When visiting the Russell-Boren home, guests will understand better how rural citizens of Burleson lived, worked and played in earlier years.”

Antiques
The antiques on display include a 1918 Edison Victrola and the icebox that preceded present day refrigerators.

Those Best Suited for Tour
The tour is best suited for students middle-school aged and older. The students should be accompanied by their teacher or parents. For more information call Russell Farm at 817-447-3316.
View available job
opportunities
Sign up to receive
notifications
Pay your bills online
with one easy click
Submit any concerns
or issues
View agendas & minutes
& public notices
[]