Overview
Since before the turn of the century, law enforcement has been an important part of City government. The City of Burleson adopted an ordinance on March 11, 1960, establishing a permanent police department and creating the position of chief of police. Until that time the City had a town marshal elected by the people or a "night watchman" who was appointed by the city council. 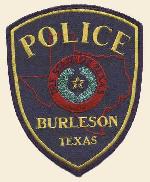